The Public Works Authority ‘Ashghal’ has opened Al Sheehaniya-Leatooriya Road to traffic today (31/8/2016). The13-kilometre new road is the longest project on the Expressway Programme to be available for public use this year. The road, which has been named Al Sheehaniya – Leatooriya Road, extends from the Dukhan Highway and Al Sheehaniya Camel Race Track to the regional town of Leatooriya.

Al Sheehaniya – Leatooriya Road will provide road users with two lanes in each direction, doubling the traffic capacity of the existing road and enabling more efficient movement of materials, goods and people between urban and rural parts of Qatar. In addition to increasing the traffic capacity of the previous expressway, Ashghal has significantly improved safety measures for drivers, including the installation of guardrails to reduce the risk of animals straying onto the roadway, rumble strips to reduce unplanned lane departures, 300 street lights, high-visibility lane markings for night driving and speed cameras. 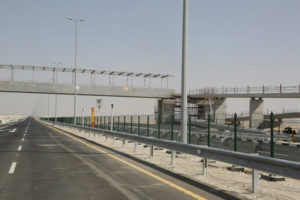 The project will simultaneously enhance existing utilities networks in the local area, through the installation of modern water supply lines and electrical and communications cabling. Ashghal is working to complete several other key features on the new Al Sheehaniya – Leatooriya Road, including a camel underpass and a pedestrian footbridge near Al Doosari Zoo. The pedestrian overpass is 75 percent complete, while the 38 metre-long camel underpass between Al Sheehaniya and Leatooriya is in the final stages of construction. Ashghal expects that the pedestrian footbridge and camel underpass will be complete within the next three months. 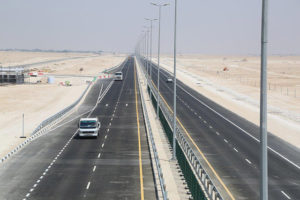 In the interests of sustainability and promoting community engagement, the Public Works Authority will also convert the existing parallel roadway between Al Sheehaniya and Leatooriya into a dedicated cycling lane and footpath. Construction of the Al Sheehaniya – Leatooriya Road, which forms part of Ashghal’s Al Sheehaniya – Leatooriya – Lijmiliya Expressway project, commenced in November 2014 and during that time, over 490 workers have been working to complete this section of the roadway. The project is being constructed by Qatar Building Company (QBC), one of the solely Qatari owned and operated contractors on Ashghal’s Expressway Programme. To date, QBC has completed the construction of approximately 80 percent of the entire Al Sheehaniya – Leatooriya – Lijmiliya project without any lost-time injuries to its workers.

The Al Sheehaniya – Leatooriya – Lijmiliya Road expressway project will establish a 29 kilometre road in regional Qatar, providing efficient transit and improving road safety for local and foreign road users. The project is expected to be complete in early 2017.